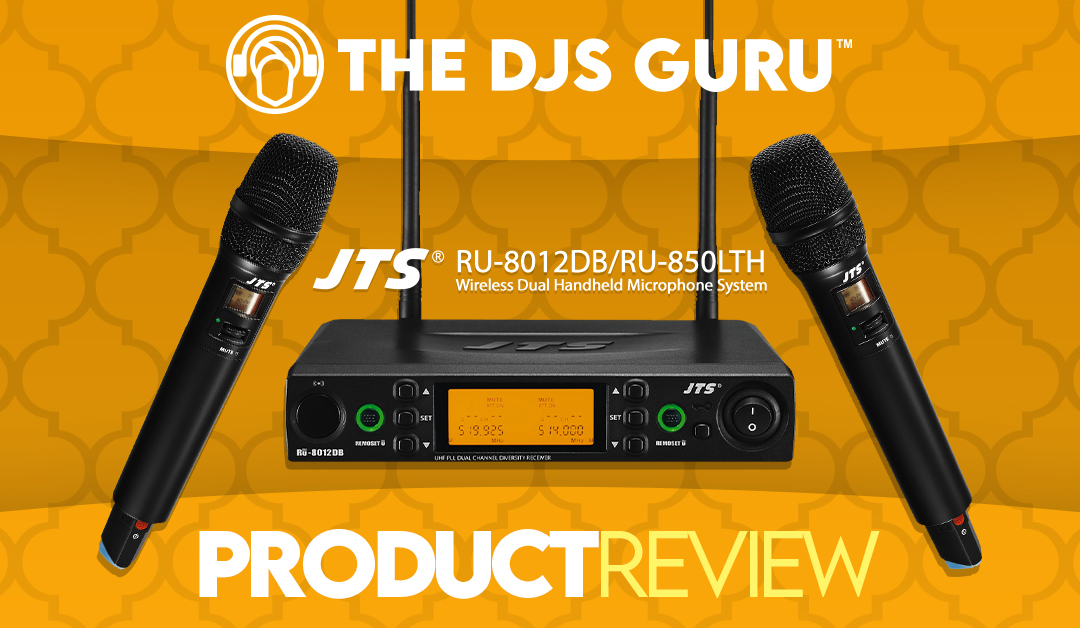 Have you heard of JTS? You may not have – they aren’t exactly a household name in the wireless microphone world just yet. However, it’s possible you’ve used one of their microphone systems in the past and didn’t even know it. How is this possible? Well, JTS is simply a brand name that one of the largest microphone manufacturers in the world has developed within the last decade. Prior to this, the company JTS had been behind the production of mic systems for some of the biggest companies in the game. We’re talking about well-known, well-recognized companies. Now they are selling their microphones direct, and today we’re here to give you a hands-on JTS RU8012DB review. First things first – the JTS RU8012DB is a true-diversity, UHF wireless microphone system. This means two completely separate radio sections within the receiver for the absolute best signal clarity possible. Holding the microphones and receiver in our hands, they feel great. The only real negative we can find with the system is the plastic build quality, which is somewhat lightweight. However, if you are looking to save money and something has to be plastic, we think your wireless microphone system is a component to be plastic. Why? You’ll most likely keep the system in a rack case, well protected from the elements, bumps, and scratches. Thankfully, this more lightweight material is one of the ways that JTS has been able to keep the price down.

Inside the box are a pair of half-wave antennas with BNC connections. DJs with a booth that has external antennas for microphone receivers can easily run cables from the receiver through their booth. The receiver itself has many groups and channels as well as an auto-scan function. This means that the receiver can easily look for the best, most available wireless frequency in the room and lock it onto it. It also has a squelch control, which acts similar to a noise gate for radio waves that squash unwanted low-level interference. One unique feature of this system is REMOSET. JTS promotes this as the world’s first remote control RF setting function. It allows for the automatic changing of the transmitter’s frequency settings from the receiver. Normally, you’d need to bring handheld transmitters close to the receiver and perform a syncing operation to align the units’ frequencies. With REMOSET, the frequency of the transmitter can be changed from up to 10 meters away!

Another thing we love about the JTS RU801DB – is the bright and clear display. It looks great and is very easy to read from any angle. On either side of the display are settings for the individual channels. Here, you can adjust things like group and channel. You can also control similar settings on the handheld itself. The RU850LTH handheld also has a setting for controlling the signal power. While it will kill your batteries a little faster, it can provide increased radio gain for transmitting in large areas. It’s also worth pointing out that the system comes in under 600Mhz, well within the allowed frequencies for legal operation. Alright, enough talk – it’s time to put this system to the test. We were able to get the JTS RU8012DB out to a few events and were impressed with the performance. However, we weren’t able to really push the system when it came to distance. For that, we chose to set up a speaker in the street and, as they say, “go the distance.” Our neighbors weren’t too happy about it, but hey, that’s what we do for you!

We started the distance test by beginning the long trek down our street. 75 and 125 feet came and went fairly quickly, of course with extremely clear sound. We paused at 190 feet to check the sound again; still perfect. While there weren’t crowds of people around, we lost line of sight with the transmitter and it kept on rockin’. 255 feet was a breeze, no need to stop there. Passing 300 feet and one of the channels continued to perform without a hiccup. We did lose one of the channels, but this was most likely due to incorrect frequency selection, as we were experiencing issues with it prior to the distance test. Even passing 350 feet the JTS system continued to function well beyond the range stated in the manual!

The JTS RU8012DB is all about value. For the cost of some single-channel wireless microphones, JTS offers this phenomenal dual-channel system that exceeded our expectations. After putting it through its paces it functioned flawlessly and left us with nothing but the confidence to use it at our events. Like we said before, with JTS being such a prolific manufacturer of microphones, we expected nothing less. We give this system two thumbs up and a big recommendation for anyone looking to pick up a wireless microphone system with maximum value.