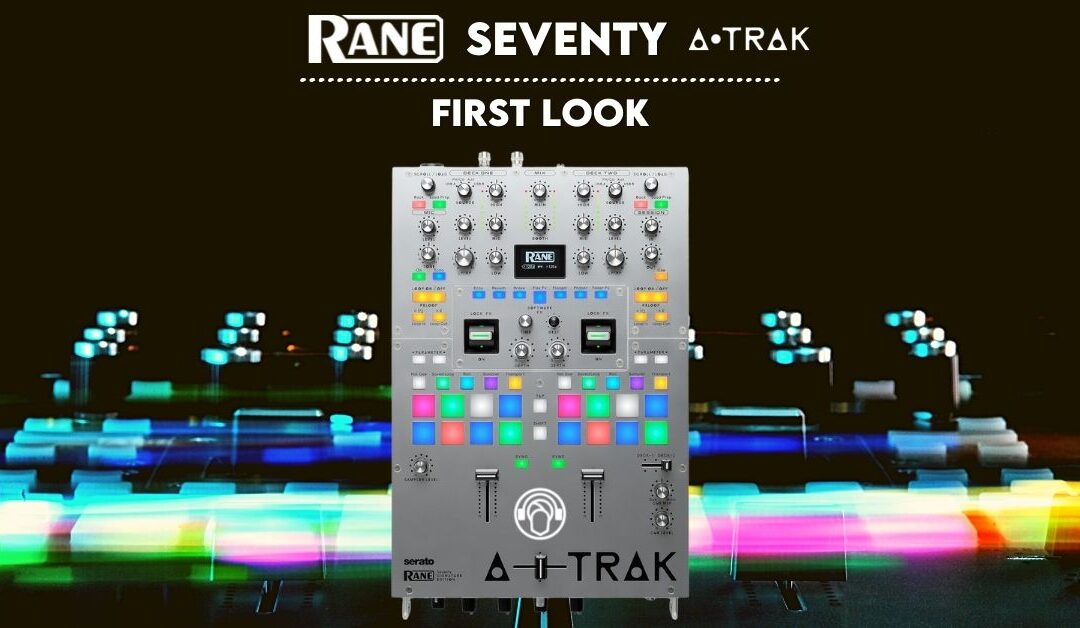 It’s an exciting day in the DJ world when Rane releases a new product, today we’re proud to announce the all-new Rane Seventy A-Trak Signature Edition Performance Mixer.  The Rane Seventy A-Trak Signature Edition is a meticulously designed remix of the popular RANE SEVENTY DJ mixer. A-Trak himself played an integral part in the mixer’s creation, handpicking the features, signature sound, and look of what he considers to be the ultimate mixer for the future of turntablist performance.

So what are the major differences you ask?  Great question, let’s dive into the Rane Seventy A-Trak Signature Edition and find out what makes it so unique and innovative.

More than just a pretty faceplate

So the first thing you’ll notice is the beautiful silver finish that gleams beneath the aluminum-capped rotary-styled knobs and encoders.  Custom font faces and elements adorn the mixer, but the real magic lies beneath the surface.

The sound curve and frequency response of the mixer was handcrafted by A-Trak himself, increasing the depth of the low end to ensure that the high-quality audio matches his signature sound.  Simply put, the Rane Seventy A-Trak Signature Edition sounds like nothing you’ve ever heard before!

From A-Trak “I’m a big believer that every classic piece of kit should have a signature feature, something that sets it apart from the rest.”   Enter FaderFX, a new mixer feature that transforms the channel volume faders into linear controllers for performance effects like Filter, Roll, Pitch, Ring-Modulator, and four types of Oscillators. DJs can dive deep into the settings of these FaderFXoptions to change root keys, octaves,and more, crafting a personalized set of tools to take with them to their next performance or battle.

BUILT ON THE SEVENTY’S SOLID FOUNDATION The SEVENTY A- SIGNATURE EDITION was built upon the solid foundation of the RANE SEVENTY, known for its intuitive layout and best-in-class performance. The same solid-steel construction that makes the SEVENTY a battle-standard mixer is found in the SEVENTY A-TRAK SIGNATURE EDITION along with the same premium MAG FOUR faders and MPC- Pads.

All of the other features that make the original SEVENTY the mixer of choice for discerning DJs are in the SEVENTY A-TRAK SIGNATURE EDITION as well, including easy access to Serato’s Scratch Bank, external crossfader tension adjustment, and six post-fader internal FlexFX(including FaderFX) which can be layered with Serato DJ Pro’s Software FX.

The SEVENTY A-TRAK SIGNATURE EDITION mixer sets a new standard of what a championship battle mixer should be and will undoubtedly bring a new level of creativity, artistry, and style to DJ performances and battles across the globe.

Here is the full feature list for the Rane Seventy A-Trak Signature Edition:

Interested in making a purchase or learning more, check it out on our partner site DJEVentGear.com or reach out to us directly for advice.  You can call us at 1888-378-1744 or use our website to contact us.