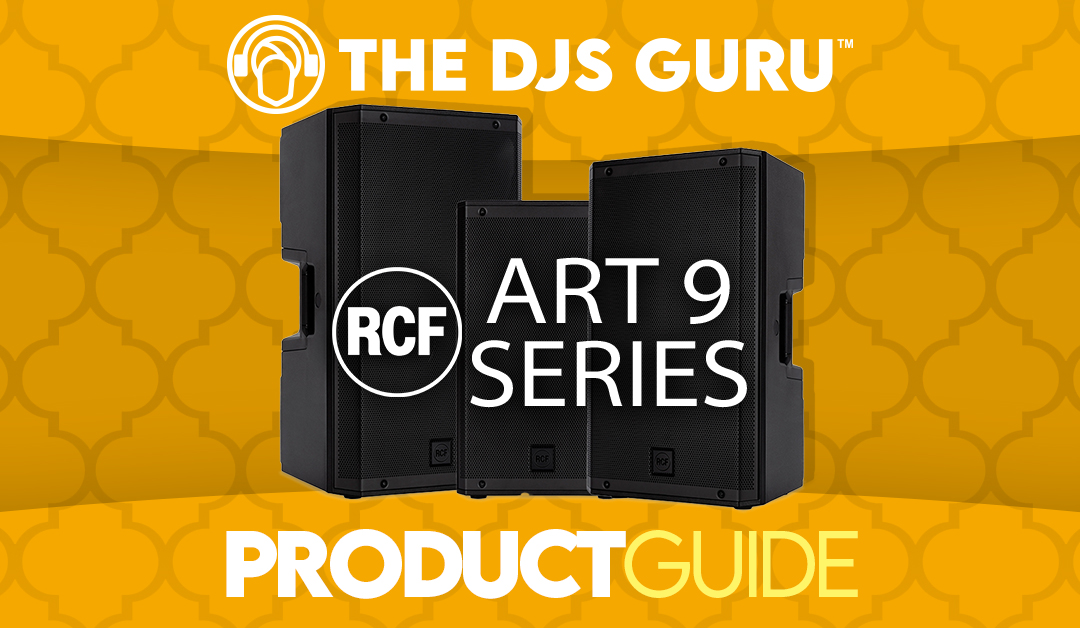 Musicians, bands, DJs, and production companies who have been in the game for a while are bound to be familiar with RCF. Their products are almost unanimously known for rock-solid construction and sound quality. When it comes to portable but powerful live sound, their ART series of speakers has been a staple in the audio world since 1996. Now, RCF has released its newest iteration of the line, the ART 9. Today, we’ll give you a complete RCF ART 9 series overview, going into detail on the upgrades made to the newest version and talking about where each model will shine.

The RCF ART 9 is, as the name suggests, the 9th iteration of this well-respected speaker. After over 20 years of refining its design, it’s remarkable that RCF is still finding ways to improve on an already impressive line. There’s a ton we could go over in this article, but here are some of the biggest highlights of the ART 9 series. 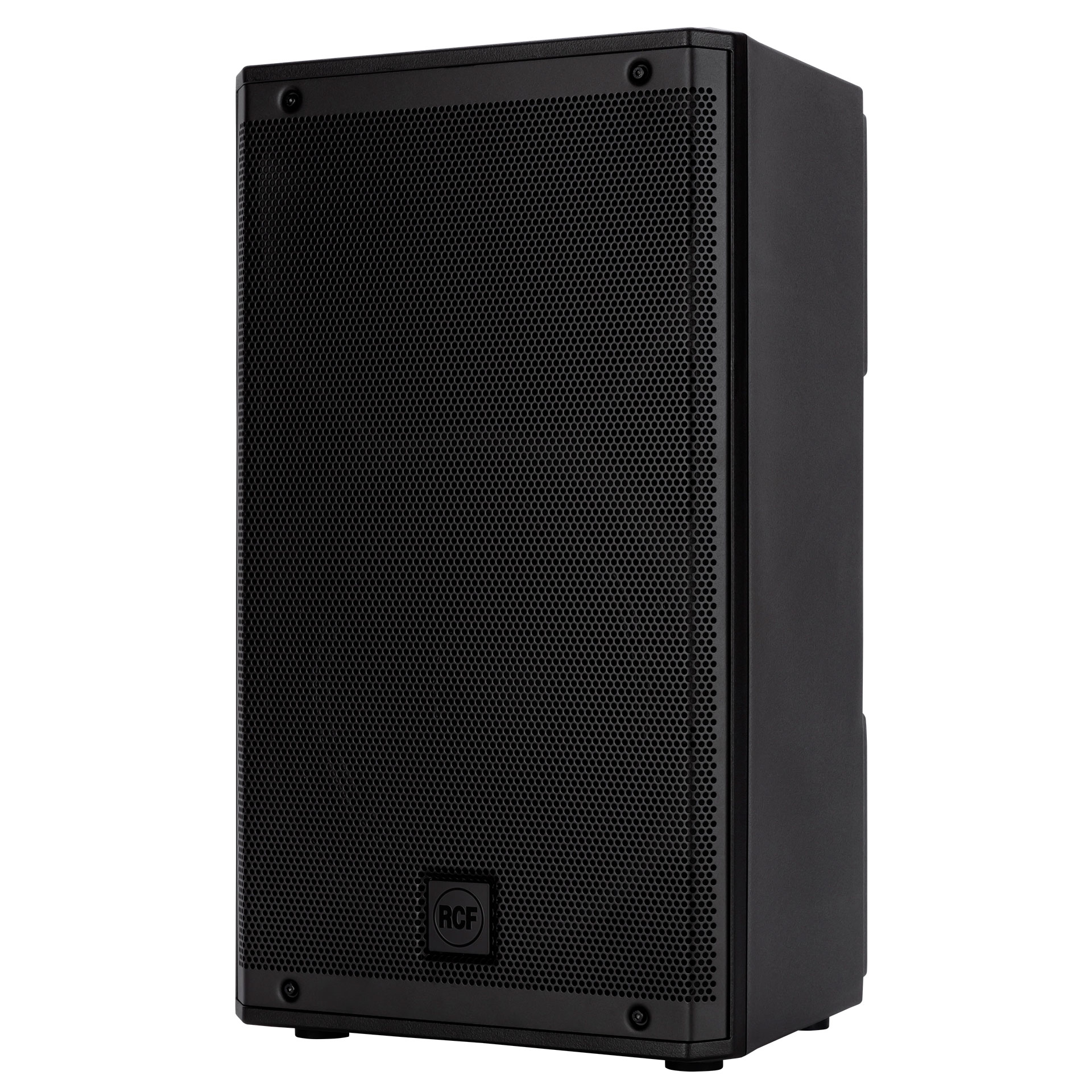 For years the RCF ART line has used the traditional approach to cabinet design with an exposed high-frequency horn and a woofer covered with a grille. With the ART 9 series, RCF has opted to follow the most modern design principles to create an extremely professional-looking and sleek all-black cabinet. It’s made of a polypropylene composite material with a unique M-brace to allow for “a completely inert body” per RCF. A steel grille now covers the entire front of the speaker. Oh, and due to the great wedge design, it can function perfectly as a stage monitor. Our opinion? It’s drop-dead sexy. 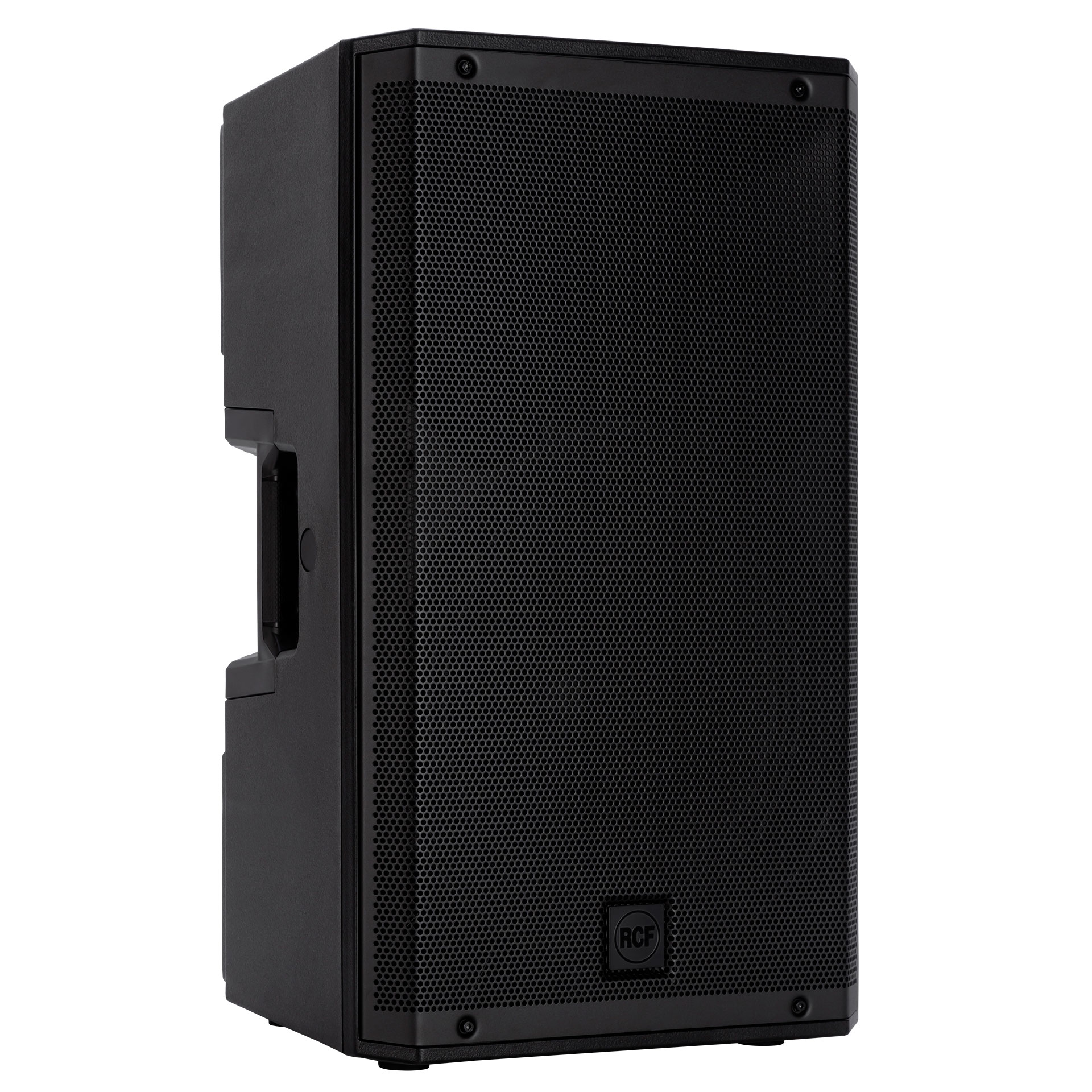 Clear upper frequencies are key for crisp sound. The ART 9 Series utilizes a new 1.75″ compression driver voice coil that they claim is 10, yes TEN, times stronger than past models. It’s made of a space-age material called Kapton that’s highly resistant to extreme heat and vibration. These qualities add up to reduced breakup at the highest frequencies and volume levels the speaker will perform under. 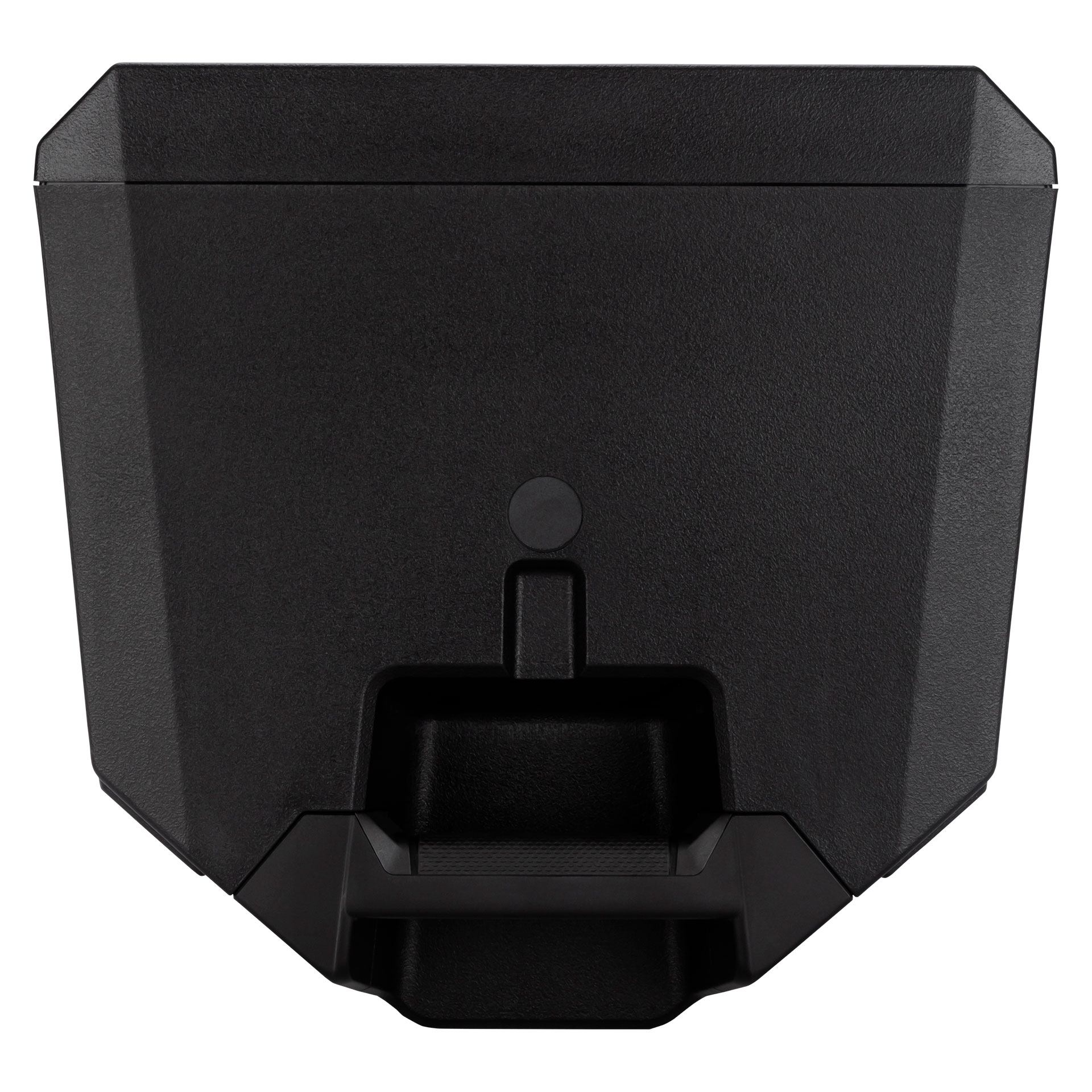 Achieving solid low-end performance in the main speaker is always tricky, but RCF has made big strides in this area. Most PA users are familiar with the high-pass filter found in the majority of speakers. It protects the woofer from destructive motion but can alter the phase behavior of the cone. Instead, RCF’s new Bass Motion Control (BMC) creates a complete map of the dynamic behavior that only limits over excursions. What does this mean for users? Total freedom of signal reproduction for the woofer equals stronger low-end reinforcement. 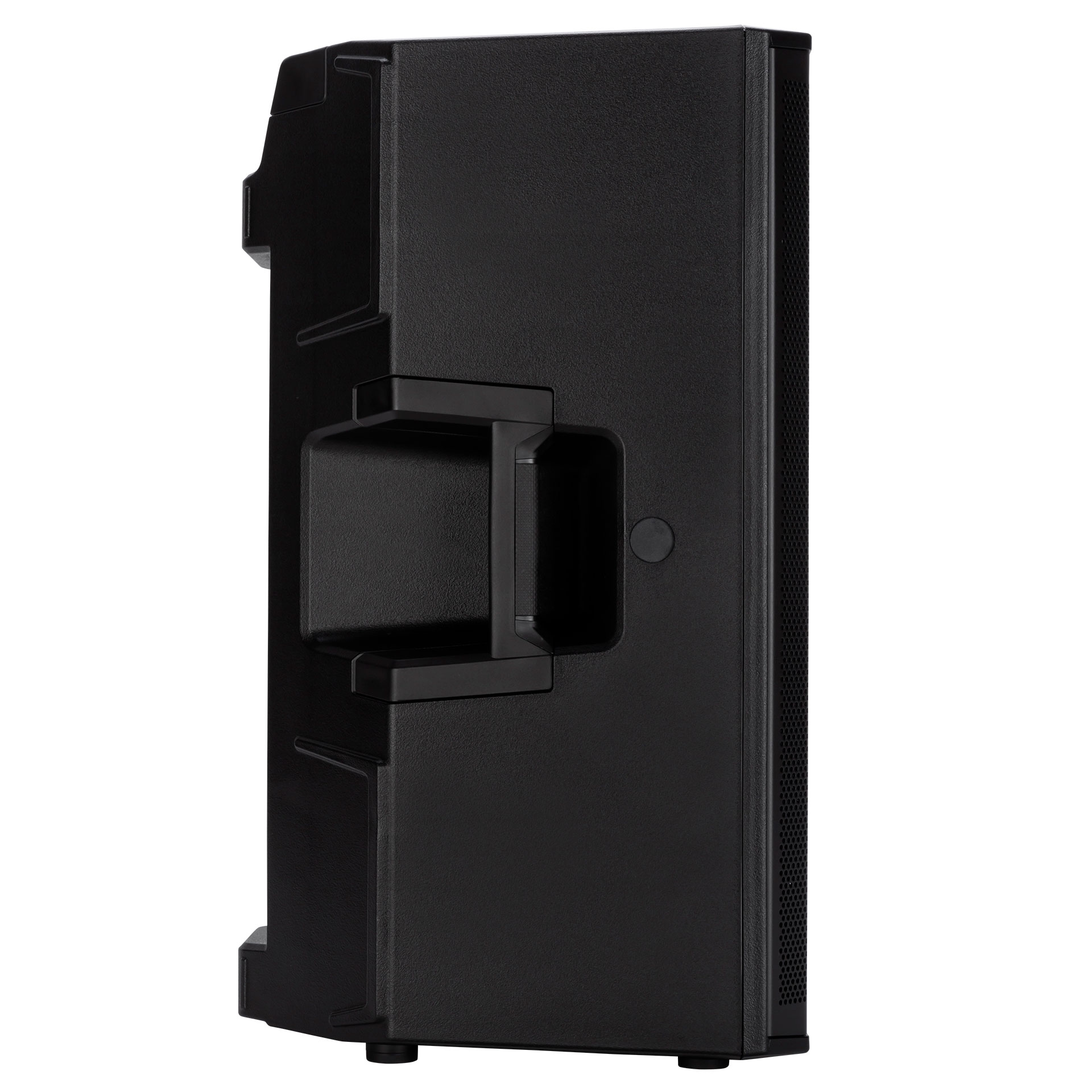 RCF is known for a clean, crisp, and powerful sound that will enhance your performance and business. Part of bringing that sound to life is their proprietary FiRPHASE technology. In a nutshell, it allows for coherent distribution of sound for all listeners without phase distortions. Using an algorithm and measurement of the speaker phase, the ART 9 speakers are able to adapt the phase without messing with equalization. They’re also able to take into account the weak points of the transducers and the resonances/cancellations of the cabinet. While RCF has an in-depth technical paper on the science behind this audio magic, we just know it means serious sound. 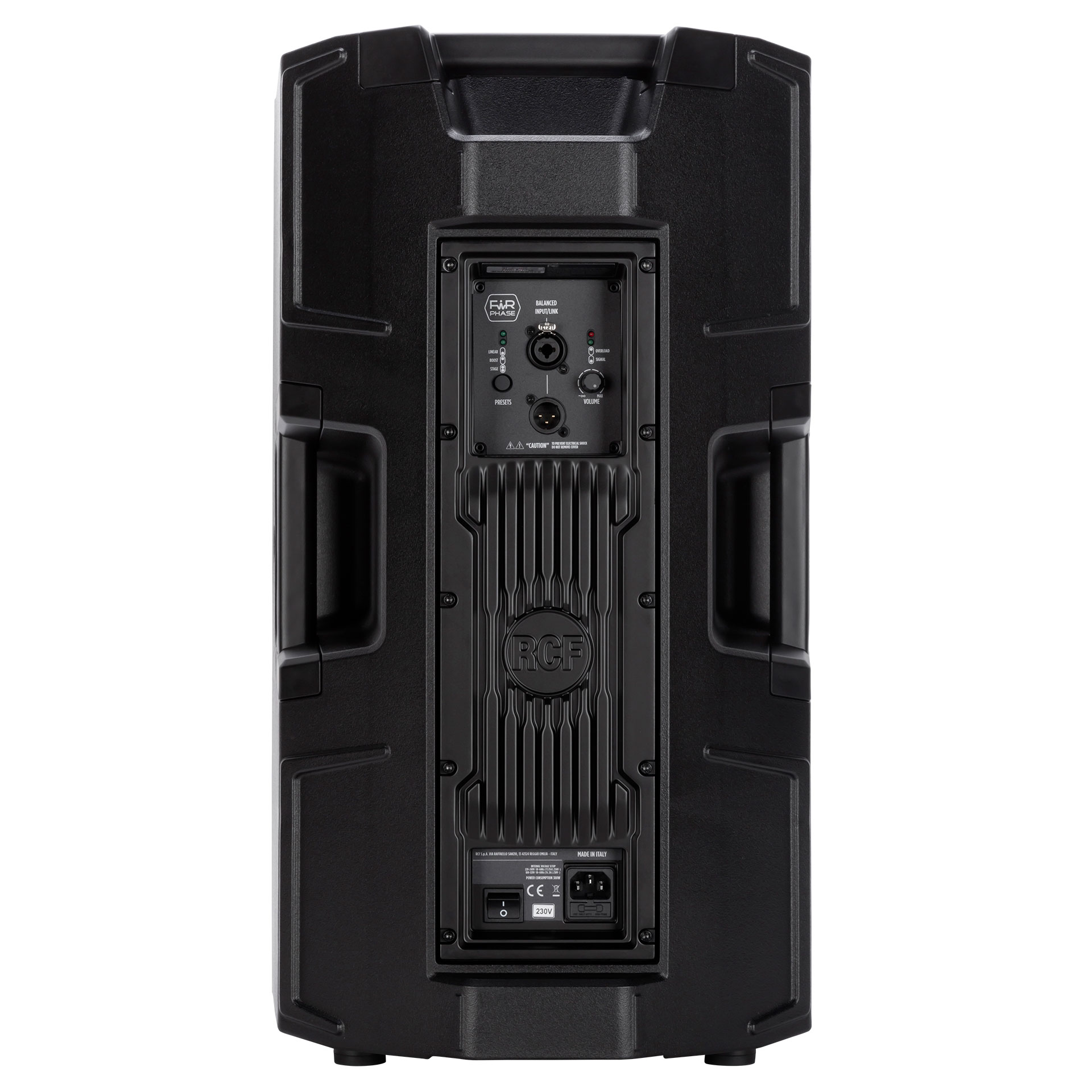 RCF seems to believe in simplicity, and the back of the ART 9 series is evidence of that. It reveals a single combo XLR/TRS input and balanced line output. To the left and right are a power indication and overload/clip light, a volume know, and an EQ selector. Users can choose between a linear response, a boosted setting, and a stage mode for monitor use.

Alright, we’ve taken a moment to chat about all of the cool technology behind the ART 9 speakers, now let’s get into individual models in the lineup. We’ll give a brief overview of each speaker and then give a few suggestions on the best applications for each model.

First up is the RCF ART 910-A, the smallest speaker in the series. Don’t let its small size fool you, however; it’s still able to deliver a very respectable 130 dB SPL. Its True Resistive Waveguide provides 100-degree x 60-degree coverage with the 1.75″ compression driver (one of the biggest we’ve seen on a speaker of this size and price). Despite its smaller 10″ woofer, it still extends down to 50 Hz on the low end. It’s the most compact model, lending itself to easy transportation and setup.

The only negative of this cabinet is that there are no side handles, only 1 at the top.  This doesn’t seem to be a major issue after months of use as the size and weight are so manageable.

We’ve said it before and we’ll say it again – the 12″ PA speaker is the everyman’s speaker. The 912-A is the next size up, offering a 12″ woofer for greater low-end pressurization. Many of the other specs are similar to the 910-A, including the dispersion pattern and 1.75″ driver. If you were only able to grab one speaker on this list to cover the widest variety of applications, the 912-A is probably your ticket. If you’re a rental house looking for a dependable, all-around cabinet, you have found it with the 912-A.

With ART 915-A, we start to see some changes to the specifications we had with the 910 and 912. Specifically, the first 15″ model in the RCF ART 9 series ups the max SPL to 131 dB. It also lowers the frequency response from 50 Hz down to 45 Hz. The 1.75″ compression driver and dispersion pattern, however, are the same. This is one of the bigger, heftier speakers on the list, coming in at 48.5 lbs. Honestly, for a 15″ that isn’t too bad, especially considering the output.

As we move to the next three models in the lineup you’ll start to notice bigger changes in the features and specifications. For the 932-A, RCF upgrades the already impressive 1.75″ compression driver to a beefy 3″ titanium/neodymium variant. This bigger transducer lowers the crossover point of the tweeter to only 800 Hz. This results in better response and superior efficiency to the previous models. Spec-wise, SPL again bumps up, this time to 132 dB.

Like the ART 932-A, the 935 retains the larger 3″ compression driver. It’s paired with the large 15″ woofer, again dropping the frequency response of this cabinet to 45 Hz on the low end for increased extension. It also ups the SPL ante yet again, with 133 dB max levels possible. All this with extremely linear frequency response. Like every model in the lineup, it comes equipped with the proprietary FiRPHASE phase technology and Bass Motion Control woofer management. As expected, it’s now heavier, but not by much (53.35 lbs).

Last but not least we come to ART 945-A. It’s the biggest, heaviest speaker of the bunch. What do you get in return for the increased physical size? A massive 4″ compression driver that puts out a staggering 135 dB max SPL. When you need the big guns, the ART 945-A is the speaker to turn to. It benefits from a beefy 15″ woofer for low-end punch and the unmatched compression driver to deliver crisp, clear, and uncompromising RCF sound. When you need your sound to hit hard and reach farther, the ART 945-A, the pinnacle of this incredible speaker line, will not let you down.

The new RCF ART 9 series is a worthy upgrade to an already phenomenal line of powered portable speakers. It updates the design to a sexy, modern finish that’s versatile and appealing. It adds more power to an already well-endowed amplifier section. And it packs in loads of groundbreaking technology that generates some of the crispest, clearest sound possible in speakers at this size and price.